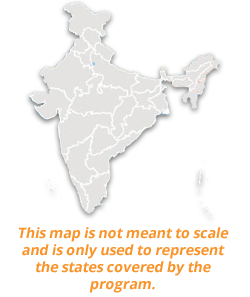 The Wonderoom was conceptualised in 2011 as a lab and centre for innovation that promotes the love for reading among children. The activities in the Wonderoom are designed to make reading interesting, engaging and connected to children’s own lives. Over time, the Wonderoom evolved into an innovative library that encourages children from different socioeconomic backgrounds to explore a world of over 6,000 books. Children also participate in a range of activities, including reading, storytelling, clubs, summer camps, workshops for theatre, music, fun science activities, etc. More than 400 children and parents attend the bi-monthly i-Wonder events, where children showcase their talents. The Wonderoom is located at Jawahar Bhawan and is open from 10 a.m. to 6 p.m. on all days.

Deepak Kumar was born to Suresh Kumar, an auto driver, and Phool Kumari on October 23, 2003. Deepak are three siblings living at 21-A Janpath, New Delhi. He has been a regular at the Wonderoom since many years. “I saw some children from my locality making paper peacocks. Later, they told me about a place called Wonderoom where they are taught such kind of stuffs for free,” he remembers. With a longing to learn new things, he asked his mother for permission to join the Wonderoom. Fearing high expenses, his mother declined the proposal. Next day, he went back to his friends and again inquired about the charges and was delighted to hear “None!” Deepak started coming to the Wonderoom with a desire to learn beyond what he encountered in classrooms. On being asked, he revealed his interest in science. With a swift laugh, he tells of his skill at repairing the circuitry of the house. And because of this reason, he takes a keen interest in the Fun Science sessions held at the Wonderoom. He loves being around Ashwini-sir, who conducts the Fun Science sessions. The sessions have helped him in his studies and school projects. On being asked to say more about his favourite thing about the Wonderoom, this shy boy said, “I enjoy the weird facts that Ashwini-sir articulates in between the sessions.” Playing kabaddi, kho-kho, and dog and bone with his friends has become another of his favourite pastimes at the Wonderoom. Being a big-time Salmaan Khan fan, he also engages in drama and dancing. He is currently studying in class VIII at Navyug School, Mandir Marg, New Delhi. He loves to draw and paint during his spare time. He even involves himself in reading mythological books and his favourite book is the Ramayana. “I like Hanuman-ii the most!” he adds with a smile.

Neha was born to Devendra Kumar, a taxi driver, and his wife Lata Kumar on December 13, 2001. She was born in Ghaziabad, but soon shifted to 21-A Janpath, New Delhi, and has been living here since then. She is the eldest child among three siblings. She started coming to the Wonderoom in the year 2013 and since then has been a regular. She was only a small girl when she got to know about a place called the Wonderoom. One day, while playing with some friends in the colony, she heard them talking about the Wonderoom. “Didi was talking about a place which had hundreds of books and thousands of things to learn,” she recalls. With a desire to learn new things and a zeal to read all the books, she ran back home to tell her mother everything she had heard about the Wonderoom. Coming from a financially backward family, her mother feared the high fees and doubted the reliability of the place. Neha smiles and tells us that one day, her mother finally came and inspected the place herself. As anticipated, the Wonderoom won her trust as well! And so began the sequence of laughter, joy and learning. Neha was already developing an interest in acting, and the Wonderoom gave a boost to her talent. She learnt a lot of about acting during the drama sessions held at the Wonderoom. On being asked about her favourite session, she says “Drama!” with excitement. She admires and takes Rajneesh Bisht as a role model—he conducts the drama sessions at the Wonderoom. Her words of admiration were fulsome while describing Rajneesh Bisht and she continued, saying, “I like his sessions a lot. I follow the small piece[s] of advice he delivers while conducting a session. He is a brilliant actor and director!” Besides the drama sessions, Neha loves to sit in the Wonderoom and read historical books. She loves reading about the World Wars in particular. She also reads picture books. She feels that there is a vast gap between the teachings of schools and the Wonderoom. Expounding on the same point, she took history as an example. She said, “In schools, the history classes tend to become dull and monotonous; whereas in Wonderoom, Ashwini-sir explains the same thing, making it livelier.” Neha considers the Wonderoom a storehouse where children get an opportunity to enhance their personality. She has been recommending the Wonderoom to several children around school and in her locality. She has even put up posters of the Wonderoom’s events across colonies and schools. “Children should join Wonderoom, else they are missing on something really worthy,” she says. She is currently studying in class X at Navyug School, Mandir Marg, and loves to do some acting and dancing during her free time.