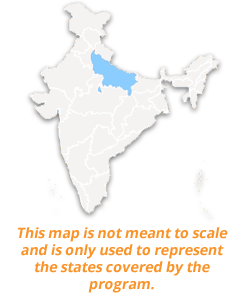 This scholarship programme focused on girl children from marginalised and minority communities in classes VI–X to make it conducive for them to stay in school and develop learning abilities. The programme identified areas in which students need support in order to complete their education, and develop individual growth plans in terms of their interests and career choices.

The Foundation launched this programme in 2007–08 in collaboration with the Sri Sivasubramania Nadar Educational and Charitable Trust. The programme was implemented through 10 partner organisations in Varanasi, Rae Bareli and Barabanki districts, and supported 1,860 girl children.

Julie was born to Shri Panna Lal and Smt. Lalmani Devi on June 15, 1996, in Varanasi. Her father was a poor weaver whose meagre income failed to support the family. Her mother worked at a nearby school as a maid, her small income making no dent in the family’s deep financial turmoil. As a result, Julie’s elder sister had to leave school after class V. Julie too was growing up, and the precariousness of her future grew too. Her schooling was at stake due to the family’s deteriorating financial situation. As anticipated, her father pressured her to leave school after class V. Julie had been a bright and hardworking student since childhood. She had a keen interest in the principles of science and the formulas of mathematics. She wanted to continue her education but the low income of the parents made it a little difficult. In all this, a blessing came in the form of the VidyaGyan scholarship programme. Julie was selected for this scholarship when she was in class VI. The scholarship left her father with no choice but to allow his daughter to complete her schooling. She was overjoyed on seeing her future clear. Julie uses the money she gets from the scholarship to pay her school fees and buy her uniform and books. “Before getting the scholarship, my school fee was always paid late, but now it is paid in time,” she says. She is taught mathematics, science, English and general knowledge at a coaching class, which helps her studies. She is very grateful to the VidyaGyan scholarship for supporting her education and expresses a great desire to study further.

Maria Varsi was born to a very poor family in Barabanki, Uttar Pradesh. Her father works as a daily-wage labourer and is unable to provide even twice-daily meals for the family. Humans earn in order to fund the basic necessities—food, clothing and housing. After fulfilling these necessities, they invest their income in secondary things such as education. But in small places like Barabanki, families still have the mindset of not educating a girl child. Maria’s father, Mohammed Shafiq, and mother, Sufia Khan, shared a strained relationship and thus lived separately. Maria and her little sister lived with her mother. Due to lack of employment, her mother could only barely manage food for the family. Her mother’s meagre income and seasonal employment made education an unrealistic dream for Maria. Because of her mother’s determination, Maria was admitted to a nearby school where she completed her primary schooling. She was enthusiastic about reading and writing. But her dreams of studying came to a halt when the family’s financial crises left them unable to sustain her education. It was the little girl’s fortune or blessings from above that she got selected for the VidyaGyan scholarship. Under this scholarship, she was given coaching in different subjects free of cost. Besides, she was even given Rs 500 per month to assist in her schooling. Maria’s mother was always worried about the future of her daughter. But the scholarship provided under VidyaGyan gave her the spirit to think about Maria’s future. The scholarship enabled Maria to brace her determination too. Maria now works tirelessly at coaching and home to excel in her studies. She is one of the best students in her class and is looked up to by her classmates. She aims to become a teacher herself and teach the underprivileged for free. She does not want any child to sacrifice his or her education because of financial crises. Her mother is grateful to the Beti Foundation and the Rajiv Gandhi Foundation for securing her daughter’s future.