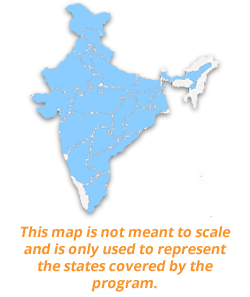 The World Health Organization estimates that more than 600 million people across the globe live with disabilities of various types. People with disabilities are subject to multiple deprivations that limited their access to basic services, including education, employment, rehabilitation facilities, etc. Widespread social stigma plays a major role in hindering their social and economic circumstances too.

According to the Census of 2011, India has 26.8 million disabled people, out of which around 15 million are males and 12 million are females. The Census also revealed that rural areas have more disabled people than urban areas. Most of the disabled are those with movement disabilities (20.3%). This is followed by hearing impairments (18.9%), visual impairments (18.8%) and mental challenges and disabilities (5.6%).

The Rajiv Gandhi Foundation believes that the increased mobility of a physically challenged person greatly enhances their access to education and employment. Based on this belief, the Foundation launched the Rajiv Gandhi Access to Opportunities (RGATO) programme in 1992. Through the RGATO programme, the Foundation awards specially designed vehicles to physically challenged young people. Since 1992, the Foundation has supported more than 2,900 awardees from 25 states and five union territories to access higher education and employment, attain financial independence, and gain dignity and respect in society. The RGATO project has received tremendous support from corporate bodies and concerned individuals too.

This is in response to your several queries regarding online Application Form for the specially designed scooter under the Access to Opportunities (ATO) Program for Persons with Disability.We would like to inform you that we are trying to mobilize the funds from various sources and donors for the ATO program. Please note that the application would be opened only once we get sufficient funds for the year 2020.

Rajiv Gandhi Foundation wishes you all a very happy and prosperous New Year 2020.

Amjad Khan, 30, was born in the Hapur district of Uttar Pradesh on July 4, 1980. In 1981, he was nine months old when he contracted polio. While communicating with us, he went numb while describing his life before receiving the vehicle. He told us the kind of social humiliation he faced while travelling from one place to another. People around him not only pitied, but also reduced him to a subject of laughter. Even as a child, he faced a lot of difficulty while carrying out normal day-to-day activities. It happened to be a warm summer day that brought with it lots of hope and happiness for Amjad Khan. He got to know about the Rajiv Gandhi Foundation’s Access to Opportunities programme, and after that, it was a matter of months before the vehicle was in his hands. This was a trailer for his upcoming value-added days. He completed his master’s course in arts after receiving the vehicle. The 20km distance between home and college was now covered with ease. On being asked about the biggest benefit of the vehicle, he proudly said, “Autonomy.” He is currently working as a secretary at the Human Ability Foundation. Apart from this, he is also a member of the Students Islamic Organisation (SIO). He is also General Secretary for a trust that he himself initiated one year ago. On being asked about the trust, he proudly shared his goals and objectives. He revealed that the main objective was to uplift people from underprivileged backgrounds. The trust also aims to create awareness among the people about the physically handicapped. Besides, Amjad also engages himself in teaching a class of 40–45 children free of cost. Parents who are unable to pay for the education of their children are sent to the classes run by Amjad Khan. He also works as a teacher at Noodal Academy School, Noida.

1993 was a tough year for a three year old boy named Rati Nath, when he lost his leg under a fever. His family never knew that a meagre fever would hamper their son’s ability to walk. Frequent visitations to doctor went futile and resulted in lowered family income. Today, when our team got into conversation with Rati Nath’s, his eyes went moist while recalling that unfateful night. He grew up in lower middle-class family, where his father engaged in a small business of herbs. Due to increased financial constraints, he had to leave his education in between. He had no option but help his father in his business of herbs.
Even after working for hours, his disability hindered his ability to work. He faced difficulty while commuting from one place to another. The sale of his business was suffering on the verge of his physical disability. He failed to take another job because of lack of educational qualifications. He shared with the team his episodes of humility and depression because of his physical disability. He faced heaps of difficulty in selling Surma (traditional eye-liners) in different areas of his village. Earlier he could cover only a region or two along with heavy transportation cost. This did not benefit the family income, instead pushed them into poverty.
It was in year 2014, Rati Nath got his vehicle from Rajiv Gandhi Foundation. And after that his life changed for good. It is widely said that every cloud has a silver lining. The scooter provided by Rajiv Gandhi Foundation was a glimmer of hope in the room full of darkness. Rati Nath seized the ray and rode towards light of success. With smile on face and contentment in eyes, he thanked the foundation for the support. Now he manages to travel in different villages and sell Surma, along with other herbs. There is a considerable increase in his daily earnings. Earlier, he managed a meagre earning of ₹ 150-200 rupees a day, but now with the assistance of scooter he earns ₹ 300-400. Apart from increased income, Rati Nath saves a lot of time and invest it in social and family gatherings.

In 1980, Sunder Lal Yadav was born healthy to a family in Rewari, Haryana. When he was 11 months old, he and his family met with a dreadful accident. He nearly drowned in a sewage pool and stopped breathing for a while. On gaining consciousness, he was struck by a strong fever and consequent stiffening of body parts. After consulting the doctors, it was discovered that he had lost the use of his leg. Sunder Lal could not have imagined that this accident would have snatched away his ability to move. His broken voice and moist eyes reflected the adverse aftermath of the accident.
Because of the disability, his studies and ambitions suffered. It took him 2–2.5 hours to reach college from home. The onerous task of propelling the triwheeler with his hands resulted in unbearable pain developing in his hands. It was in the year 2010 that he was noticed by a member of Rajiv Gandhi Foundation, who suggested that he seek aid from the Foundation.
In the year 2013, the Rajiv Gandhi Foundation gave wings to the dreams of Sunder Lal Yadav. It is well said that resolute goals only require a slight push. One such push was offered by the Foundation. After receiving the scooter, Sunder Lal’s life changed radically. All his dreams and aspirations started turning into reality. With the help of the scooter, Sunder Lal completed his postgraduation course and got a diploma in computers. The vehicle enabled him to get his vendor licence from the DC office. He is currently employed selling and writing stamp papers at Rewari tehsil. All this has contributed to an increase in his monthly income to Rs6,000.
Apart from economic support, the scooter strengthened his social standing as well. He mentioned his increased participation in the cultural activities of the tehsil. With the assistance of the scooter, he has contributed to social work and mixed with people. This social attitude towards the community has made him a member of the panchayat of his village. On being asked about his objectives on becoming a member of panchayat, he mentioned education and electricity as the key areas. With the support of the scooter, he actively engages with the youth club of his village, which focuses on environmental, social and educational issues. He is perceived as an active member of society, and he acknowledges the help that the scooter has given him.