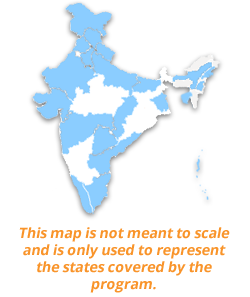 Violent conflicts have been one of the biggest threats to the progress of our society. The pain and losses arising out of violence impact children the most. Children impacted by violence tend to lose out on education and are also at high risk of falling into the trap of violence themselves.

The Rajiv Gandhi Foundation has been working to support children affected by conflict since 1993. The Initiative to Educate, Rehabilitate and Assist Child Victims of Terror (INTERACT) is aimed at supporting children and their families as they cope with the trauma of loss, escape the trap of violence and realign their lives.

The INTERACT programme started with children from Jammu and Kashmir, Punjab, Assam and two districts in Andhra Pradesh. In subsequent years, other conflict-affected states such as Tripura, Nagaland and Manipur were included. In 2002, children from Gujarat and in 2003, children in Mumbai were included in the programme. In 2006, scholars were selected from Chhattisgarh. Till date the Foundation has supported 2,115 children across 11 states and two union territories. This also includes 134 scholars who pursued higher studies or vocational programmes.

Other conditions for support:

Govardhana Devi’s father was a police constable in Warangal district of Telangana. He was killed by Naxalites on October 7, 1996. The unexpected death of her father left the entire family in shock. Her father not only supported the family, but also her old grandfather and grandmother. The unanticipated demise of her father paved the way for many troubles and difficult times for the family. Govardhana Devi’s father was the backbone of the family. His absence left the family shattered both mentally and financially. In this situation, Govardhana Devi received help that was very important in these punitive times. She received an education scholarship from Rajiv Gandhi Foundation under the initiative named INTERACT. She was in class I when she received the first cheque. That cheque received by her family held an importance for her future that nothing else in this world can. The INTERACT scholarship helped her complete her primary education. She passed her Class XII examinations with 96% marks and made not only the family but also the Foundation proud. She further cleared her M.B.B.S. examination and secured a seat in one of the most reputed medical colleges, Gandhi Medical College, Hyderabad. This was made possible with the rigorous financial support of the Rajiv Gandhi Foundation. Govardhana happily told us, “I am going to become a doctor in coming days, and the credit goes to Rajiv Gandhi Foundation. My entire family is grateful of the help rendered by [the Foundation].” Furthermore, the state government of Arunachal Pradesh gave her mother a job in the police department, as a clerk, on June 1, 1998. The scholarship helped her to complete her education and gave wings to her dreams. The scholarship covered her college fees, costs of textbooks and uniforms, and everything else pertaining to education. Govardhana strongly feels that the valuable support of the Foundation has enlightened the lives of many Naxalite-affected families. She appeals to the Foundation to extend its support to as many families as possible, to improve their lives socially, financially and psychologically.

The lives of N. Thambou Singh and his three siblings were completely devastated when their father was taken and killed by insurgents. Call it divine design or luck, this bright boy was recognised by the Rajiv Gandhi Foundation. Thambou was taken in under the Foundation’s education scholarship programme, INTERACT, and his life changed for good. He was sent to Agnel Bal Bhawan, Greater Noida, by the Foundation when he was barely in class I. But the family had hardly recovered from his father’s death his mother died as well a year later. The Rajiv Gandhi Foundation did not turn its back on the orphaned children but pledged to support them throughout. Thambou grew up in Noida, excelling in every field, whether it was academics or sports. He set a record in the Delhi Marathon and even captained the Delhi state football team. He took up a hotel management course at Punjab Technical University after completing high school. The Foundation didn’t withdraw its support even then and aided him under a scholarship programme for higher education called INTERACT-II. As part of his training, he started working at KFC and became an ambassador at The Taj- Vivanta hotel. After receiving his degree in hotel management, he joined Crowne Plaza, Greater Noida. In order to satiate his urge to live in his homeland, he returned to Manipur and joined the Classic Group of Hotels as chief steward. While visiting Delhi to stay with his relatives, he felt nostalgic seeing KFC and immediately applied for the post of shift manager there. Having got himself transferred to Guwahati, he spent most of his time with his family. He has grown up to be a perfect gentleman and married a lovely lady on October 18, 2015. He is leading a happy and contented life with his wife at Dimapur, a peaceful life with the family he always yearned for. He earns a good salary and returns home to a loving wife. He has shared with the Foundation his future plans of working in the tourism sector and helping the needy.

Thangjam Chanulenbi Devi was born in a small town of Imphal, Manipur. She was a mere three years old when her father was shot dead by an unidentified gunman at Keisampat on April 12, 1992. With the death of her father, she and her mother found hoards of hitches in their lives. Chanulenbi’s mother, Satyabhama Devi, was very young when she was widowed. In order to earn a living and fund the education of her little daughter, Satyabhama began to embroider clothes. The income which came from embroidering clothes was not enough to make a living, however. The difficulties of earning a livelihood were hard on mother and daughter until the KSDO identified their case and sent Chanulenbi’s application of educational sponsorship to the Rajiv Gandhi Foundation. The Foundation selected her for its INTERACT scholarship in 1997. Chanulenbi was in lower kindergarten then. The Foundation took care of her school fees, uniforms, books and everything additional pertaining to education. Her mother’s eyes puffed up with happiness when she received her first cheque in 1997. Chanulenbi has a prompt and creative mind, which helped her overcome her unfortunate times. Chanulenbi’s mother was toiling hard with her embroidery work, yet still earning little. She tried opening a small paan shop at her residence, which then failed as insurgents declared attacks over Zarda and Meetha Pan Sellers. She was left with no alternative but to frequently visit a nearby town to buy goods to be sold in Imphal. The continuous efforts of mother to earn a livelihood had adverse effects on the education and schooling of little Chanulenbi. She had to stay with neighbours or friends for 2–3 days while her mother was away to buy goods from the other city. The situation was getting difficult for both the mother and daughter to handle. After consulting relatives and neighbours, Chanulenbi was sent to St. Savier’s International School, Shillong, in class VIII. The school authorities were impressed to see the hard work and spirit of Chanulenbi and transferred her to St. Savier’s International School, Kerala. It is from this school that she passed her class X examinations in the first division. She completed her senior secondary education from Bhartiya Vidhya Bhawan in Andhra Pradesh. Having discovered her interests, she joined Vivekananda College of Engineering and graduated with a degree in B.Tech. (Information Technology). In 2014, besides a degree in engineering, she returned home with hopes and happiness. After spending a considerable amount of time with her mother, she headed back to Bangalore in 2015. There, she took a job at Omega Healthcare Management Services as an AR associate. Her eyes reflect contentment and her smile speaks of gratefulness to the INTERACT scholarship now.