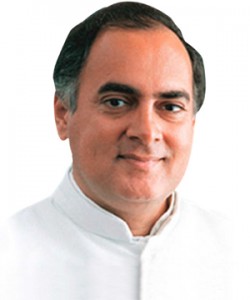 Shri Rajiv Gandhi was born on August 20, 1944 in Bombay (now Mumbai). He spent most of his childhood with Shri Jawaharlal Nehru at the Teen Murti House. After completing his education from the Doon School, Shri Gandhi went to study at the Trinity College, Cambridge and Imperial College (London) where he took a course in mechanical engineering. On returning home from England, he obtained a commercial pilot’s licence and joined the Indian Airlines.

Shri Gandhi became the youngest Prime Minister of India on October 31, 1984. He bore the burden of the assassination of Smt. Indira Gandhi, his mother, and rose to serve the nation with extraordinary composure and dignity. As Prime Minister, he inspired hope and promise amongst millions of Indians. Shri Gandhi was modern in outlook, yet passionately in love with India’s culture and civilisation. India’s stature as a premier nation in the fields of science and technology, communications, infrastructure development, and space research is a direct result of numerous initiatives that Shri Gandhi led.

Education: Shri Gandhi took some excellent initiatives to improve the literacy rate in India. During his tenure as Prime Minister, the Indira Gandhi National Open University (IGNOU) and Jawahar Navodaya Vidyalayas were established. The New Education Policy, which aimed to give a new thrust and direction to education in India, was also introduced in 1986.

Environment: Shri Gandhi’s interest on preserving natural resources and the environment was visible through his actions. Sensing the danger to the planet and life, he brought about the Environment (Protection) Bill, 1986 before the Parliament. The Bill was passed by both Houses and received the President’s assent on May 23, 1986. Shri Gandhi also got the 1952 National Forest Policy reviewed and was instrumental in framing of the new Forest Policy in 1988. The new policy emphasised sustainable utilisation of forest resources. India’s first ever Water Policy was adopted by the National Water Resources Council in 1987 with Prime Minister Shri Rajiv Gandhi as its Chairman.

Liberalisation of Economy: On June 2, 1988, Shri Gandhi’s government announced the new industrial policy which contained the proposal to delicense a number of industries. This policy boosted industrialisation and laid a strong foundation for the liberalisation of the economy.

Decentralisation: Shri Rajiv Gandhi believed that decentralisation of power was essential to ensure that the fruits of development reached the grassroots. The strengthening of Panchayati Raj institutions thus became central to his developmental plan. A bill to amend the Constitution and provide constitutional status and safeguards to Panchayats was drafted and introduced in the Lok Sabha on May 15, 1989, as the Constitution (64th Amendment) Bill.
Promoting Peace: Shri Gandhi had been a messenger of peace throughout. During his tenure as the Prime Minister, he brought energy, enthusiasm and vision to a country divided on the basis of creed, caste and religion. After securing his office, he first resolved to deal with the Punjab problem, which caused turbulence in the country. The Punjab Accord was signed on 25th July 1985 between Shri Rajiv Gandhi and Sant Shri Harcharan Singh Longowal, President of the Shiromani Akali Dal.

Shri Rajiv Gandhi announced the signing of the Assam Accord, a Memorandum of Settlement, following the Assam Agitation movement, in his address to the nation on August 15, 1985.
The Mizoram Peace Accord was signed on June 30, 1986, by Shri Laldenga, leader of the movement, Shri R. D. Pradhan, Union Home Secretary at the time, and Shri Lalkhama, Chief Secretary to the Government of Mizoram. The Accord provided full statehood for Mizoram with a 40-member Assembly. Mizoram became a state on February 20, 1987. The Indo–Sri Lankan agreement was signed by Shri Rajiv Gandhi and Shri Jayewardene in Colombo on July 29, 1987.

International Relations: Shri Rajiv Gandhi chose nuclear disarmament as one of his major foreign-policy planks. As part of the global campaign for disarmament, Shri Rajiv Gandhi and Shri Mikhail Gorbachev, General Secretary, Communist Party of the Soviet Union signed a declaration for a nuclear-weapon free and non-violent world on November 27, 1986. The Delhi Declaration was a significant initiative for promoting nuclear disarmament. The involvement of the Soviet Union in this effort lent considerable weight to the campaign. It signified a key achievement of Shri Gandhi, who was single-mindedly and tenaciously spearheading the disarmament campaign.

Shri Rajiv Gandhi made two visits to the USA, one in 1985 and the other in 1987, which gave an impetus to the Indo–US relationship, expanding bilateral trade to a significant degree. This intensified the collaboration between the private sectors in both the nations. The US–India Fund for Cultural, Educational and Scientific Cooperation was also established during the period. Shri Rajiv Gandhi’s visit to China during his tenure as the Prime Minister of India was a great success. It strengthened his conviction that the relationship between India and China has a larger dimension.